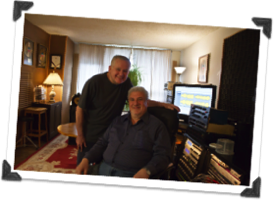 THE AUSPICIOUS APPRENTICESHIP OF GENE PAUL

Gene's tribute to his father....